Emoji are part of today’s language and this book explains them wonderfully. 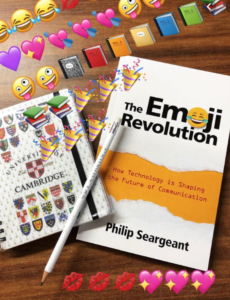 This really is a wonderful book, a fantastic guide and a fascinating exploration of language, gesture and how we call communicate.

There are those who think emoji are symbols that children use, but their importance stretches out in the world and probably as far back as cavedwellers who used to like writing on walls.

Like many, I use these strange symbols and I find myself doing that more often as social networks begin to proliferate, but I usually use the same ones without any real idea what I’m trying to say. After reading this book, I now know how much detail and subtlety is needed when using them.

On first look, I didn’t think I’d feel this way. The cover was underwhelming, the pages were as shiny as the heaviest of academic books and the text was, bizarrely, unillustrated apart from black-and-white emoji. I expected a stodgy read.

My experience was the polar opposite. Coming in at just under 200 pages, the book is not a quick read, but the information therein is delivered with aplomb, beautifully written and full of old and future knowledge.

From the weird control of the 12 Western people who sit on the board of the Unicode Foundation to Marcel Duchamp to Moore’s Law to the etymology of obscure words such as ‘snollygoster’, this is a work that loves words as well as symbols.

As a person who loves books and words, I learnt more here than I ever would in three Malcolm Gladwell novellas and with enough emoji knowledge to hold my own at a dinner party… or children’s tea party.

After years of reviewing books, this was the greatest surprise of them all and if you were wondering what snollygoster meant, it was an early 20th Century word, favoured by Harry Truman, describing a shrewd, but dishonest person, especially one involved in politics.

Sound familiar? Perhaps we could bring it back… and without an emoji in sight.