Rise Of The Machines is not an easy read, but one that is worth all the effort it takes. 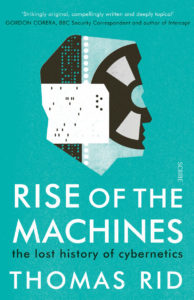 The theme of Rid’s book can be illustrated by US countercultural writer Richard Brautigan who wrote about humans being looked after by ‘machines of loving grace’.

Rid refers to Brautigan’s words of loving grace towards machines and to a lot of things besides. He tracks the theory of cybernetics, a control theory of machine and man, from its post-World War II origins through the myths and realities of its evolution.

Nicely written in spite of its complicated premise, Rise Of The Machines is a weighty read, but a very useful reference book to anybody interested in our possible or impossible futures.

The previously unwritten story of Russia’s cyberattack against US institutions in 1999 may be an act of war that may yet determine a probable future, and not a optimistic one at all.