This contribution is by Mike Johns, President of Digital Mind State 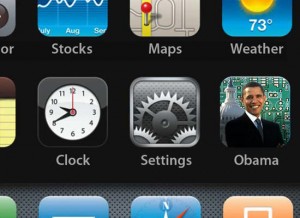 President Barack Obama is the most technology-savvy US politician ever, leveraging online, mobile, social networks and other media to build a vast volunteer and fundraising operation to become the nation’s 44th President.

He also has two accounts on Twitter @BarackObama and @Obama2012. On the mobile front he is the first-ever president to have his own mobile app, Obama for America, Obama’s Change mobile wallpaper and lest us forget his impromptu a cappella performance of Al Green’s hit Let’s Stay Together that has become a ringtone available on his official website.

President Obama has become the most tech savvy leader the world has ever seen with a huge lead over the leaders of China, UK, Japan, Germany, Russia… and Somaliland.

During the 2008 presidential race to the White House Obama was able to leverage social media sites and raised $55 million in less than 30 days. After winning the Presidential election he kept his Blackberry, becoming the first President to have access to email. Interestingly neither George W. Bush nor Bill Clinton used email during their terms in office.

In an era of extreme innovation and a society that is always connected, the key to Obama’s success is his understanding of real-time communication, key collaboration, connectivity and the ecosystems of communities.

Team Obama has mastered how to touch various communities and appeal to the mobile lifestyle. It is apparent that Team Obama realises people are no longer in the office or the home but out there in the environment, not tethered to one place.

The Obama marketing mix has simply been about delivering the right message to the right person at the right time. No other world leader has captured mobility as President Obama has.

John F.Kennedy took advantage of the television, Ronald Regan was labeled the great communicator, Mr. Bill Clinton was the first president to appeal to the MTV generation and now we have the nation’s first ‘tech-savvy’ president.

Obama’s broadband initiative is a clear illustration that his administration understands the importance digital technology plays in further advancing America into the 21st century. Under his watch we’ve witnessed the FBI move from a paper-based case management system to a digital system of records, using a modern web-based application.

Call it fate or perfect timing, but President Obama represents pop culture and technology. He used digital technology as a tool to get into office as well single-handedly changing the stereotype that Governments synonymous with bureaucracy move slowly.

He’s the opposite, he’s revolutionising the US Government services by using smartphones and tablets, Obama said “Americans deserve a government that works for them anytime, anywhere and on any device.”

Love him or hate him, other world leaders can take note to what he has accomplished using the power of digital technology… and a power that is likely to seem him re-elected in November.