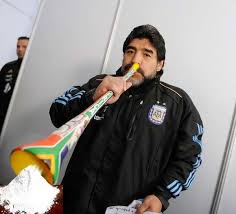 We all remember Maradona and his cheating limbs, who probably played every match coked off his head until he finally got caught.

Wouldn’t it be wonderful if he would be remembered for this picture, hoovering up a pile of cocaine with a vuvuzela, thus defining a corrupt man whose whole career was based on stupidity, vanity and some white powder that made him a better player than he ever really was.