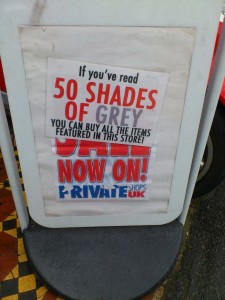 Twitter was fantastic last Friday night as the Olympics opening ceremony unfurled in front of us. The gags came thick and fast and it was a wonderful juxtaposition of spectacle and sentiment. Amazing.

But something was missing in Doyle’s layered tableaux of Britishness. At first I thought it might have been a band missing from the shuffle list of British music, but then I got it. THERE WASN’T A SINGLE MENTION OF FIFTY SHADES OF GREY!

Forget Harry Potter or Tolkein, surely there had to be some form of homage to the fastest selling paperback in history, perhaps a phallus dedicted to E. L. James next to Kenneth Branagh’s stovepipe hat with nods to her benign repackaging of Brett Easton Ellis’s Patrick Bateman in American Psycho.

I asked a (female) friend recently to summarise the book for me. She said the ‘plot’ was about a dominant male and a younger woman who thought that she could change him. Wow, that’s an amazing idea, I don’t suppose anybody has ever trafficked that particular bullshit before.

Bras were burnt in the 1960s, but a lot more vibrators were bought than burnt bras and Jessica Rabbit changed more lives than any penny dreadfuls like this.

What it doesn’t say is the biggest truth of all… pornography is shit, sex is good. We all do it, we all (generally) love it and sometimes all that fun even delivers a new life and a child as well. Birds do it, bees do it, search engines certainly do it.

I once sat on a bench in Stoke Newington’s Abney Park cemetery on a snowy Sunday 20 years ago trying to finish Justine by the Marquis de Sade. I didn’t use an e-reader and I read scenes in that book that in retrospect were appalling. It didn’t help when I realised that the grave behind me was occupied by William Booth, the founder of the Salvation Army, it was as if I was EVIL.

And that, I’m afraid, is what people are who enthuse about that book. They are evil because it defines the laziness of publishing, the hysteria of trends, the brutalising of women and peddles the myth that women need men for sex.

They don’t and perhaps it was a very, very good thing that Danny Boyle didn’t allude to it in his opening ceremony fantasia or did he?

Was there a copy of the book on the keyboard in front of Mr Bean? If not, that’s the only place it belonged… A joke next to a joke.