BlockSpeak 8 is all about another crazy Jon McAfee prediction. 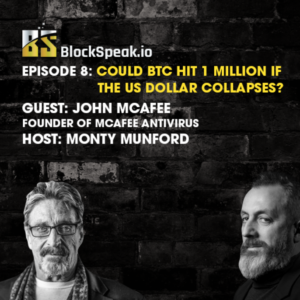 BlockSpeak 8 features again the wonderful and wacky Jon McAfee who has agreed to be a regular guest on the show with another ‘performance’ guaranteed in a couple of months’ time.

If BlockSpeak 3 was all about McAfee’s adventures in eluding US justice in the Dominican Republic and allegedly trafficking cocaine in South America, this episode is based on McAfee’s observations about cryptocurrencies and the US dollar.

While a lot of McAfee’s words should be taken firmly in the cheek in which they’re delivered, his prediction that the Bitcoin price will reach one million dollars if Covid-19 continues to devastate the world’s economies is not as daft as it sounds.

Again, coming from a man who said he used to frequent whale sex clubs and that he would cut off his penis if the Bitcoin price didn’t hit one million dollars in 2017, nothing he says can be trusted… just the way he likes it.

Speaking more soberly (if that is possible or even makes sense) than on his previous appearance on BlockSpeak, McAfee focuses less on spectacular tussles with the Police and US authorities and more on cryptocurrencies themselves.

He bristles when Bitcoin is mentioned, preparing to comment more on cryptocurrencies in general rather than the most famous one. He also speaks about the Ghost coin and protocol that he is about to release and why it matters.

While McAfee is often regarded as a joke figure, it is always interesting to listen between the words because a fierce intellect is at work here. As the founder of the anti-virus McAfee software that is probably on the computer you’re reading this from, nobody should bet against McAfee and his prophecies.

He signs off with his opinion about the popularity of Zoom in the days of Covid and why it is full of holes and a hacker’s dream. This is one episode that should not be missed.