Civilized (To Death) may be spelt with a ‘z’ and not the correct ‘s’, but this intriguing book makes up for it. 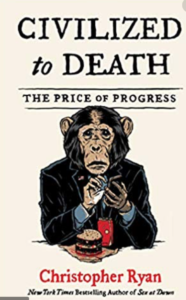 Civilized To Death will not be published until October 1st, but the wait will be worth it. This book is smart, timely and well-written.

Christopher Ryan is a psychologist and author who was previously the co-author of the New York Times best-selling book Sex At Dawn.

I read the book in three sessions and while it did preach to the converted and I naturally had writer-envy while digesting it, there is a lot here.

Not only to ‘enjoy’, but also to remember, not least Ryan’s obvious love for when foraging was the world we were… and seemingly all the better for it.

Unfortunately, my relationship with UK foragers is difficult after overhearing a conversation last year at the very entitled Port Eliot festival and a very entitled (and clearly) wealthy woman talking about her upcoming foraging weekend, but even so I learnt a lot of things about this type of civiliSation.

Civilized To Death is scrupulous and researched in a way that only journalists know how to and repeats what most of the good ones know… we are going to hell in a fucking handcart unless we change all of our habits. Ryan seems to think we can only do this by dissolving civiliSation.