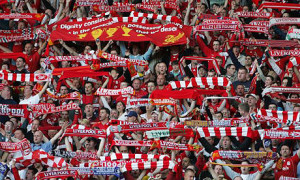 Football supporters are not the brightest people (I love football), but the terrace chants were always good for topical wit.

When I was a kid at (super) Brentford FC in the Royal Oak end and was occasionally the one to start a chant, it was the most intoxicating feeling when people joined in. It may even be responsible for the way I’ve created my networks over the years.

Football, of course, is much changed from the 1980s, er I mean, 1970s. The creation of mostly all-seater stadia has seen that side of culture become as mundane as the plastic seats its progenitors now sit upon, but occasionally a fabulous one will slip out.

Such was the case at the recent Brighton and Hove Albion v. Crystal Palace match.

Now, these two teams hate each other. They are kind-of local rivals, but the increased enmity goes back to a FA Cup tie in 1976 when a last-minute penalty by Brighton was missed and a feud was born. This YouTube video illustrates it nicely.

So, twice a year they go at each other and if we were back in the 1970s, then it would have been with Stanley Knives and machetes, now they must make do with abuse.

Brighton matches now sell out and attract up to 30,000 fans; Palace struggle to fill their ground. So, when one Brighton fan found out that Palace were using Groupon to attract potential supporters, the outcome for chanting was inevitable.

So altogether now, sing it loud in the same way as Liverpool fans sing that old favourite from the movie Carousel, You’ll Never Walk Alone: