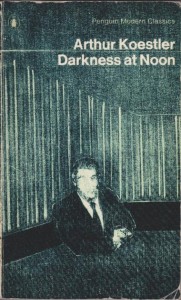 For those of you who haven’t come across him, Arthur Koestler was a great writer who committed suicide with his wife at their Knightsbridge home in 1983.

Hungarian-born and a man of the Deep Left, his 1940s book Darkness At Noon was one of the first to recognise that the Utopian of a truly communist society was over and would always end in a totalitarian state. Think of it as a precursor to 1984.

Koestler was also a committed Zionsit (we can’t all be perfect) and in 1932 while drifting over the Arctic in a Zeppelin (as you do), dropped a Star of David flag onto the tundra of Russia’s Novaya Zemlya and claimed it as a Hebrew national home.

What a different future our world would have had if Palestine and the future state of Israel had been previously supplanted by Novaay Zemlya. Whatever side of that fence (both figuratively and actually) you stand on, there’s no disputing that particular axiom.

But now in 2013, not 1984, it appears that the human race is not experiencing darkness at noon, rather living one second away from the midnight destruction clock and it has nothing to do with bombs, Israel or human-directed politics and war.

It’s those machines again. Earlier this week I went to Boston to find out about the future from a company that has annual revenues of $2.2 billion and love to describe themselves as ‘the biggest company that nobody has ever heard of’.

If I felt like a personal Cassandra before those 24 hours, then I had turned into a personal Megidio the following day when I saw how this data company viewed humanity. It’s all about the data, we know that, but their future is data without soul.

It’s data for speeding things up, making voice commands more succinct, stripping humans down to bytes. People talking to TVs, those TVs talking back, the ghost of HAL and all of those near science-fiction brands that people always refer to. Voice-activation, speech biometrics, humans constantly accessed for geolocation, for behaviour, for patterns to help algorithms, for us to improve the machine until we are effete.

I look back at Koestler and his wife, the former committed suicide because at 77 he knew his brain was beginnig to fail, the latter because she loved that brain. I read that the first person to reach 150 years old has already been born.

Our lives exist for the cosmos, not for any ayurvedic singularity, but for the march of the machines and our earlier than expected demise. It’s enough to want to emulate Koestler and get off this crazy planet and see what the next level is.

Or maybe that’s what they want us to do, to give up and cede our data, give it up to the Eye in the Sky and toodle off. So, maybe it’s better to fight. Take more time off digital, leave the mobile alone on the shef, put the tablet under the bed, ignore the drones that are inevitaby comparing to a small tract of air above your head and enjoy the time we still have.

Because I am absolutely convinced that those of us who remember a life without mobiles, fast computers and deadly digital, are faced with such an unfamiliar and unsettling future that it’s probably best not to think about it, it might be worse than Hell itself.