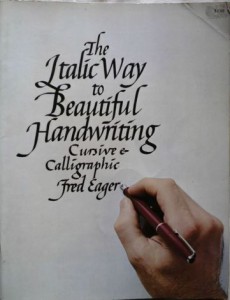 In 1994 I decided to throw my life up in the air, cut all my ties and head off out in the world again. I’d been living in the same place (London) for about four years and it was as if the I was a dead man walking; time to feel alive again.

I wanted to write a book. I did write a book. It took me 349 days and took in Perth, Colombo, Goa, Varanasi, Kathmandu, Lahore, Toronto, Vancouver and San Francisco. I finished the book on the Berkeley campus after typing it up on a friend’s Apple Mac.

When I finished, it was the best and worst day of my life. I beatniked it to Jack Kerouac’s cafe, Vesuvio’s, opposite City Lights bookshop and put the manuscript on the bar, got wasted and then realised I had nothing left to really live for, a bit like that CIA obsessive in Bravo Dark Thirty.

What I had also done was write the book in ink. All of that time I had a Mont Blanc fountain pen, a Quink inkwell and a proper manuscript. I wanted to be a writer, not a typist and I kind of knew that I was the last breed of writer and that in the future only weirdos would write with a pen.

That sad day seems to have arrived, in America at least. From 2014 in 45 US states, the art of writing with a pen will cease to be a mandatory part of the curriculum. It will be replaced by the ubiquitous keyboard skills and another slice of life will be barbecued.

Don’t get me wrong, guvs and guvesses, I’m no Luddite. I am a passionate adherent of coding, especially for kids and I know you can’t stop progess, blah-blah. Even so I don’t see the point of consigning cursive to horrible history.

I’ll hold my hands up. After finishing my book I only used my Mont Blanc for crosswords and business notebooks or other pens for writing out betting slips… and I had dumped joined-up writing when I started joined-up thinking.

But after seeing my nine-year-old being taught (and struggling with) cursive writing as well as take AGES to finish his Christmas thank-you letters, I thought I should set some type of example and pick it up again.

It was a nightmare, my handwriting was a puerile scrawl, it was like being 13 years old again. Silly letters and really ugly, but after a while some memories were poked and I remembered how much I used to love using an old italic pen. Since then I have perservered and it’s now almost presentable.

Now, I won’t be setting up a calligraphy school any time soon and I will never have beautiful writing, but it feels good when a flow gets going and I’m coming keep it up. I’m also going to go back to writing Arabic. That is even more beautiful and I can do that better than English, it’s proper cursive, know what I mean?

I’m not saying I’m going to send out this newsletter in pen and ink because that would be daft and Luddite, but give it a go. Literally pick up a pen and remind yourself of one of life’s really great joys. Get it down on paper, man!