Ultrasound technology can also be used to assess body fat. 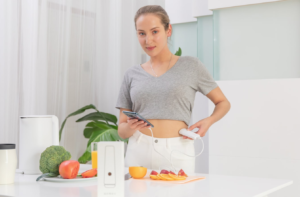 However, it can also be used in a more prosaic and regular way and that is to define the body fat of an individual, so please be introduced to the Marvoto Z1 Ultrasound Body Fat Scanner, a somewhat ingenious product that may help people to define and shape their body weight.

There are many who would question the need for such a product. Isn’t it just as easy to buy a pair of digital scales and then work out one’s needs that way? Maybe so, but those scales can be very unreliable. They have to be used on a flat surface for a correct number and they are notoriously fragile, not the best quality when they have only the one job.

According to the company, the Marvoto Z1 applies ultrasound imaging that has been used for more than 20 years and it has an excellent safety record. It is based on non-ionizing radiation, so it does not have the same risks as X-rays; comforting to know.

Using a QR scan to download an app, gel is applied to the waistline area and then the scanner is activated, it takes less than ten seconds to do this. Once the results are in, body fat can be measured on a daily basis.

Naturally, it is more applicable when somebody is beginning a regimen to get rid of their body fat and sculpt their body, so it is very useful as a tool to measure exercise and changes of diet. At first, it seems like a lot more effort than just standing on some scales, but in the long run the Marvoto Z1 Ultrasound may prove to be a useful accessory.