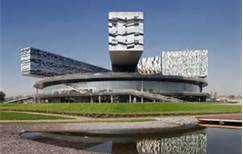 It’s early in the morning at a ‘sprawling’ location on the outskirts of Moscow and the main stage is pumping out 1990s rock by the Young Radicals.

Queues are forming and the first act is up in two hours, it’s like any other MittelEurope summer festival, but this one is different. For a start, there are no bands, there are definitely no drugs and the strongest intoxicant on offer is a cup of milky faux-capuccino.

Even more bizarrely, there is a drone above my head and I’m not sure whether that’s a great or creepy thing; probably the latter.

This is Startup Village, the first and largest startup conference in Russia organised by the Skolkovo Foundation and an event of 5,200 people, 1,800 companies, 320 investors and 300 media from 48 countries. The mission is to showcase the investment-friendly face of Russia as it vies with other global cities to define itself as a technology hub and cluster.

The opening speech has just begun… it’s in Russian, but my Bosch headset is translating seamlessly and the speaker is citing Steve Jobs. The drone has flown off somewhere and a Vine-esque loop projected on the Hyper Cube is showing an animation of a rocket taking off.

It’s unlikely that Jimi Hendrix or even Ray Manzarek are likely to come on stage next, after all the Russian Transport Minister is a hard act to follow, but there is something of the Woodstock about this event. It lasts for the next two days and it looks as if it may be interesting.

All sessions (including startup pitching sessions) are being broadcasted live for the next two days. Just click here to get all-areas access.