The workplace is changing in ways that seemed impossible only recently. Andy Swann’s book explains what is happening in lovely business language. 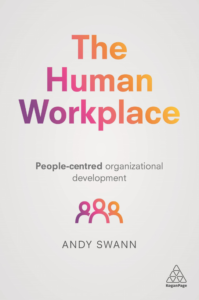 I’m really not a fan of business books and as somebody who’s worked from home or a beach for the past decade, I’m not really interested in ‘workplaces’ either, but I really enjoyed this super-fast read.

I’ll disclose now that I’ve met Andy Swann a number of times and although we operate in different, ahem, work places, I’ve always been impressed by his demeanour and manner; he also loves what he does, so I promised that I would review his book.

Admittedly, it has taken longer to do so than I thought because I don’t read business books, but this is a nicely written book that will interest those who work in office management, HR, head-hunting and even psychogeography.

It does suffer from the devilry of small text and font, but that might just be my eyes. Swann uses many modules, graphs and box-outs and they are deftly utilised, not least being on the same page as allusions to them.

So many business books are irritating in that area. On one page is the description, then readers have to go overleaf to find the object of the description.

It’s really easy to read and refreshingly free of anecdotes and clever stories. It gets straight to the point and it’s not surprising that Swann is also a consultant, strategist and public speaker at conferences. It gets to the point.

Being over-critical, it looks as if this book has taken time to be written. Some of the industry examples seem from a lot time ago (18 months/two years!), but that is like any book that is published nowadays; they’re out of date before they’re published.

However, and this is important, The Human Workplace is not time-critical, its messages are current and even visionary, so that slight weakness can be overlooked.

You can buy the book here.

It’s expensive for somebody like me who prefers LITERATURE, but if this is your line of work, The Human Workplace will prove valuable in the way we work and how we do so. It’w worth the £20 or so for a hardback, but Kindle at £12 might be more appropriate.

I would imagine that The AI Workplace will be the sequel, but Swann’s book has at least a decade before it, like all humans, becomes obsolete.