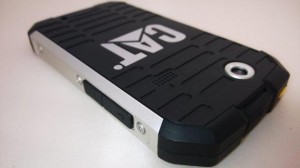 I recently had the highly depressing and long-winded experience of breaking the screen on my Nexus 4. If there was ever a cottage industry that needs modernising, it’s that one.

It took two suppliers, three attempts, four weeks and £135 to fix the screen and made me think differently about the so-called ‘strongphones’ that are becoming increasingly popular.

These are rugged products that companies such as CAT market as unbreakable, waterproof and which can be dropped from almost two metres. Round the world yachtsmen use them as much as plumbers do, so I splashed out £230 without a contract for the CAT B15Q.

A month later, I’m sold. It feels like a proper phone, thick and textural and all-weather. I know it’s in my pocket; its bulk reminds me and if I was a working man (rather than a glorified typist) I’d throw it in my tool-box like a tape measure.

It’s brilliant. Goodbye fragile-screen, I don’t need you any longer… although I miss your snazzy camera sometimes.