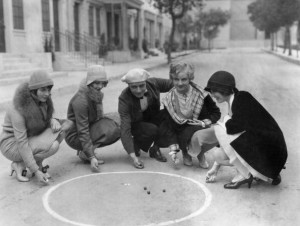 It was the 16th Century English poet John Donne who said that ‘no man is an island entire of itself’ and this maxim has endured for almost 500 years. Effectively Donne was saying that humans need to be in groups, not in isolation.

The need to participate in actions is crucial to humanity. When we do this with things we love, our levels of engagement and happiness soar. Watching football is better in the pub or with friends around, playing sport is better in a team and going to a gig with mates is more enjoyable than going alone.

Same with videogames, be they console, PC-based, tablet or mobile. While solitary people can sit happily with Doodle Jump all day long, multiplayer games and the sense of belonging in a community is one of the largest driving forces behind the games industry today.

One such example is Kongregate, a free open platform for browser-based games that has more than 15 million unique visitors per month. Playing games in groups is good for the soul and even better for the platform that provides it.

The same is also true with the wave of mobile chat apps that have swept through technology over the past couple of years. We talk in groups, so why don’t we play in groups? That makes a lot of sense – games added to group-based chat apps.

A real-time and user-driven experience instead of a slow and asynchronous experience creates a sense of urgency and spurs activity between people. It’s like turning on a switch. Eyes dilate, people become excited, people jump in.

Moreover if a users add a bonus, extra feature, or other gameplay enhancers by unlocking them for a whole group, it is similar to buying a round for everyone in the pub. It is not necessarily about individual accomplishment, but perhaps more about appealing to the social context that is experienced within the game.

There are several concepts that works well within a text-based environment. But, when adding the group perspective, things get really interesting. How about raising a pet dragon along with your friends, taking care of a farm or creating a city together?

Players of clan-based games typically have to use chat apps as companion apps to their games. We’ve seen this happen a lot in our group chat app, Palringo. We cater to that audience, both by releasing ‘in chat’ games but also external native mobile titles, which are enhanced when playing connected to Palringo.

You might want to coordinate attacks, discuss new features, access certain game modes or just talk about the game in a more relaxed environment. This is further evolved by adding a group vs group dynamic. A highly engaging game mechanic that our company will be focusing on in the future.

Of course, group v group may be similar to the ‘every man is an island’ citation earlier in this post and island v island may creation its own dynamic, but in a world where the technology is good enough to keeps up with humanity’s need for groups, the future of games is likely to be like this. And a jolly fine thing that is.

Magnus is CMO of Palringo as of April 2014 when his company Free Lunch Design was acquired. With a background in both marketing and mobile games, his expertise covers both app store marketing and game development. Palringo is a group messaging app with a focus on the convergence between community and gaming. Developing and publishing mobile games to a global audience. Magnus is a frequent lecturer at conferences such as Casual Connect, Nordic Game and Develop Conference.