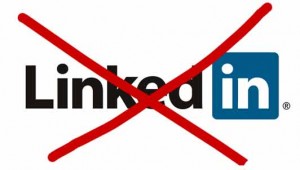 This week I officially deleted the Facebook account for this (highly successful and influential etc) blog and decided to take the professional social network LinkedIn seriously.

I’ve never liked LinkedIn, for some reason it reminds of me of a criminal record and unsuccessful job interviews so I have always treated it with contempt. I don’t use it, I don’t ask to be connected to anybody, my CV is reasonably untrue and I only say yes when somebody connects me.

I may link to it if I write a particularly non-offensive editorial and I just leave it hanging there; passive doesn’t even start to describe it. However, for some reason I have more than a thousand connections and sometimes a bit of work dribbles in through it.

I won’t go into why I have dumped the dating-site-that-got-lucky-and-still-hasn’t-recovered aka Farcebook, but this week I was chatting with the charming Bryan Tookey, COO of social media montioring company Brandwatch about LinkedIn.

Bryan is ex-Google and smart, but his idea of a network is more likely to be his home Wi-Fi rather than a collection of mavens in which to plunge and communicate, but he mentioned that he’d invited all of his Gmail contacts to LinkedIn and it had bumped up his network.

So I had a go. It was like casting a drift net and catching dolphin as well as tuna. Any email that had cced somebody meant they were my ‘contacts’ and 776 emails were sent. I was bombarded…. wave after wave of acceptances and, gulp, some fanastic offers of work, an invitation to speak in Africa and, gulp, gulp, an old mate who I hadn’t heard of five years.

Ah, the lightbulb, the spider in the cave, the penny finally dropping. If you take a social network seriously then it can be really useful, who knew? Even so, I still hate LinkedIn sending me an email saying ‘CONGRATULATIONS’ in the same way that WordPress says f**king ‘Howdy’ every time I log in.

I still hate the interface, I still hate the stupid blocks of so-called useful information on the right sidebar and I abominate receving blanket messages from Groups that I was stupid enough to sign up for… and to be perfectly honest I did have a nasty lunch with their comms guy and PR when I had the temerity to write about their French rival, Viadeo (we’re friends now btw).

So I go forward with LinkedIn into 2012 with my hand twisted behind my back and my feet in chains, but even so it is a far, far better thing I do now than dealing with that stupid, ineffectual Facebook… which I’ve just found out takes 14 days to delete your account.