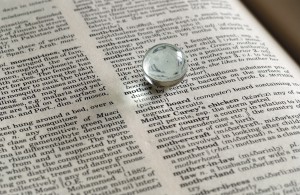 In a so-called ‘new development for dictionary publishing’, the Collins English Dictionary is using data from Twitter to identify new words, and asking Twitter users to vote on which one should be included in the next edition of the dictionary.

Every year new words come and go, but online interaction and social media have speeded up the process as new words and ideas go viral. Lexicographers at Collins are using Twitter’s powerful data as a research tool to help uncover new and emerging words on the internet, to study their usage, and measure their popularity.

Until midnight on 28th May, Twitter users can vote on a shortlist of new words and the winning word will be announced in June, and go into the new edition of the Collins English Dictionary, which will be published in October 2014.

“Twitter offers us an immediate snapshot of how much a word is used. The tried and tested approach to compiling dictionaries has to adapt to embrace the ways in which language is developing and this is a fun way to get Twitter users involved in defining the English language,” said Andrew Freeman, Associate Publishing Director, Collins.

Some early favourites for inclusion are: