I originally wrote this in July for The Memo, which published a watered-down version. After recent events, I thought I’d publish it in its original form here. It’s quite angry and contains swearwords, although I use wanker when I really mean cunt. 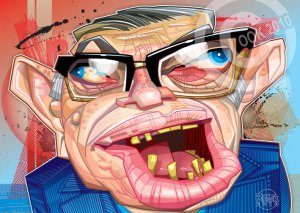 In World War II, the Nazi propaganda machine wanted the world to know that the British were starving and running out of food. They used the term Dementica Brittanica to describe this so-called state of being.

Some would say that leaving the EU was a similarly demented act and as we live through this important summer, it’s easy to think of The Reprieve, Jean-Paul Sartre’s second book in his Parisian trilogy leading up to and during World War II.

The book describes the time when Chamberlain went to Germany to see Hitler, pronouncing ‘peace in our time’ when he came back home. The intelligentsia of Paris naturally went orgiastic with this news. Jazz, cocaine, fucking, plunging forks into the back of a ballerina’s hand when wasted and then doing it to oneself; we’ve all been there.

Nobody’s saying that Saul Klein is deliriously plunging his crockery into his or Elizabeth Vardey’s flesh or that the London tech scene is copulating widely across Shoreditch, but nobody is expecting a happy ending when reality bites after this summer on the shore of the Lethe.

For now, Shoreditch empties and we fiddle in the Al Malfi, Southern California and on the sanded-down surfaces of Mediterranean yachts, there’s word that nobody likes us any more. The only silver lining seems to be a Trump victory in November; at least intelligent Americans will flood into London. But that won’t happen, will it? WILL IT?

So, talent will leave London, startups will fall, VC money will dry up, the Government will move money to other parts of the country because they’re ‘disenfranchised’ and London’s tech scene will die. It deserves to die because it houses the 1%, tech workers are no different to bankers. Blah, blah, blah.

What utter bollocks. No, it won’t. It won’t because London is the best city on the planet. Not because of spirit it showed during World War II, but because of its genius in a crisis. When recessions hit, London pisses on every other part of this country. It rises, it creates things like punk. It starts movements.

Disenfranchised UK is a ridiculous term. Have they stopped selling fucking books in Sunderland, Swindon or Skelmersdale ? Is there no internet in Shropshire? No schools in Thanet or Penzance? Has ambition been outlawed in Upper Ramsbottom and Lower Porthkerry?

Much easier to blame the elite, especially if they’re from privileged London. With their fancy London ways, setting up cornflake shops and where every woman is called Red, Scarlet or Meringue and the men flounce like Beau Brummel and where being a dickhead is cool.

Nothing’s changed. People and talent run to where the money is. London has attracted the best of British for centuries, and in this new-found Digitopia, London has brought in talent from across the world to work in this tech cluster.

London loves brilliant people, London embraces those who embrace it. Not everybody loves London when they arrive. It’s unfriendly, it’s too fast and a lot of people leave London if they don’t make it.

Yes, the London tech scene is an elite, but a brilliant one. There’s the odd wanker, but amazing things are happening there. It’s a revolution, the world is accelerating and London is leading this wave.

Awesome people, not like bankers at all. More like the coolest kids and oldies that most people can’t live up to, like those who are not elite, like those who cut the heads off tall poppies, who hide resentment in ironic jokes and sneer at success. Somehow, it’s not British to be a winner.

As a teacher once said to me. “Munford, you’re a typical fucking socialist. Got nothing and want to share it with everybody”. Actually, come to think of it, that’s exactly what I’m doing with this piece.

And I don’t live in London any more, I moved down to Brighton 20 years ago. I’m that ‘odd wanker’ I described in the previous paragraph. But still, fuck you, I’m a writer; I have a licence and I come lovingly to London every week. As soon as the train arrives at Victoria station, the London self returns. Leave your sandals at the door, I’m back.

Of course it could all go wrong. The worst excesses of Silicon Valley means there are more odd wankers there and maybe more London exits will create more entitled idiots, but Brexit has brought a sweet spot.

Those who run off to Berlin, shift to Stockholm or drift to Dublin can do so. It’s very easy to relocate in Digitopia, just plug and play. Those who want to come to London while they still can and party like it’s 1999 before the UK finally leaves the EU are more than welcome.

But for those who stay, those who fight out the shit that’s around the corner, those who carry on doing great work and changing the world for the better, really the better, you know who you are. Don’t ever change.

Rule Britannia isn’t really a phrase that anybody should like, but Rule London is. No demented people here. Dementica Britannica my arse.