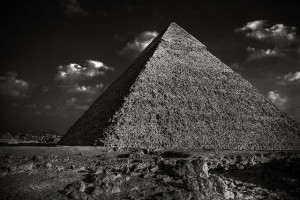 It’s funny what comes around. Twenty-four years ago I was in Cairo. I was skint and had flown there from India via Jordan where I had hitched to see Petra and then done the same down to Aqaba, before boarding a cattle boat to Nuweiba in the Sinai.

I had around 100 leather bracelets with me that I’d bought in Rajasthan and was trying to sell via some Thai Muslim mates at Cairo University. I was sleeping on a chair in a slum apartment and every day for ten days I’d walk into central Cairo with just enough money for bread at the local baker before being told at the bank that the hundred quid I had wired for hadn’t arrived.

Then I went to Poste Restante to see if any letters had been forwarded from India. Every day there were no letters until one particular Friday. It was from my best mate who had flown back from our travels to New Zealand because of a family illness. He didn’t know where I was, but he would be in Cairo on February 16th; it was February 15th.

Those were the days, my friend. As the great American writer Don Delillo once said about the times when he ‘didn’t give a fuck or a farthing about what happened next’. I met my mate the next day at the airport, he had some money, so we got drunk in dirty bars arguing about death and the existential laws of travel.

The next morning we woke at dawn, got a taxi to Giza, took a bottle of wine and swigged it from the top of the Cheops Pyramid before being met by the local Rozzers at the bottom.

We blagged it, left with smiles, went back to an early morning bar and I convinced my mate to buy two Air Egypt tickets to London so I could pick up my hundred quid and watch Brentford play Manchester City in the 4th Round of the FA Cup.

I managed to bunk into the ground, saw an unexpected 3-1 victory and we slept at some mates’ places for a week before getting a return courier flight to Boston for £49 and what should have been the next adventure.

Unfortunately, US Customs took against my attire, guitar, attitude and impecunity and only granted me a two-week visa. We took a van up to Chicago and Madison, blagged it some more, nearly drove off a ravine in the ice until my mate decided to go to Toronto to marry the girl I introduced him to in Goa and I went home.

So… last week I found myself at Boston’s Logan airport again and in front of US Immigration. I was a (paid-for) invited guest and I was prepared for the usual thing with these people. They love to fuck with you, wind you up, treat you like a terrorist instead of a moneyed guest to their country.

Even so, my heart was beating like a car stuck at 125mph (read the newspapers) as he questioned me. I was tempted to tell him about my previous experience, but thought better of it. I was ushered in, enjoyed my time there and came home.

Now, as luck would have it, I’ve been home like 1989 for a week and I’m going to Cairo on Saturday en route to speaking at an event in Nairobi. Even more bizarrely, Brentford FC are playing a FA Cup 4th Round match this weekend against Chelsea.

So, perhaps I’ve peaked. Perhaps everything is cyclical now, perhaps life is like a football season. Once you’ve played every team once, all you can do is play them again; there are no no new teams.

In those days, I was in Cairo, then I was in Boston, now I was in Boston and I’m going to be in Cairo. If Brentford beat Chelsea 3-1 on Sunday as they did Manchester City in 1989, then I KNOW something’s going on.

For now, I’ll enjoy the ‘proincidence’ and ponder whether I’m too old to scamper up a pyramid again, but I probably will. I will also definitely will Chelsea v Brentford on the TV because I’ve found a bar on the Nile that is showing it.

A lot has changed in 24 years, things I could not have imagined, least of all watching Brentford on Egyptian TV, but there is something about this repeated and backward symmetery that makes me unbelievably happy about life; unbelievably.