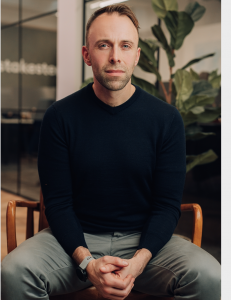 Welcome to Mob76 Outlook, Tom, an audience of gamer-savvy people: tell us about Stakester

Hello Monty! Here’s the elevator pitch: we’re an app that enables you to win money and prizes playing skill based mobile and console games. We’re launching a VIP pass NFT project that will allow our users to play for more money, win better prizes and upgrade their entire app experience.

Holders of the top tier NFTs get a revenue share of qualifying competitions played on the app – so effectively, you can invest in the business by buying one.

“Gaming” meets “gaming” so not really a gambling company?

Not at all: gambling is when you risk money on chance outcomes that you can’t control. We don’t believe in that – we put you in control of your own destiny. We take games that are already exciting and fun to play, and we add an extra dimension.

On Stakester, players get rewarded win or lose – so we reward the process of improvement as well as the results.Plus, when they do win they get receipts so they can brag about how good they are.

Excuse my lack of knowledge, but would Fan Duel have been an inspiration?

The lack of knowledge is all mine! I honestly have no idea what that is. But, I’ll tell you why I founded the company: I’m a very competitive person, and I believe that if you’re good at something then you should be rewarded for your effort.

My mum always used to tell me, “You’re not a bad loser, but you’re a terrible winner.” I think I set Stakester up for the terrible winners out there: it’s all about the bragging rights.

The idea must have come about with mates at the pub?

It’s the ultimate way to settle a debate: who’s better at X? The only way to find out is to put something on the line. But, the thing is: once you’ve proved you’re the best, you don’t want to take your friend’s money again and again.

You want to branch out by testing your skills against better opposition. If it’s a good, fair fight then you can make new friends – and some very satisfying enemies – that way.

The company was set up during the pandemic, right?

Just before, but we exploded once everyone was stuck at home. Obviously, you’d rather that success came with a different backdrop, but we clearly offered something for people when all of society’s normal competitive outlets were closed or cancelled. Plus, people were playing games a lot more – so I think people were looking to add a new dimension to the games they love. And there we were.

How quick was customer acquisition?

Very. There’s a clear demand for this – lots of people find us on their own. We also create a lot of content across YouTube and our blog, and it’s crazy how many people discover us that way.

Since we launched the mobile games side of the product, that has helped us reach a whole new audience too – literally everyone plays mobile games. We’re at 100k MAU now and our pace of growth is increasing every week, it’s such an exciting time.

And the funding history and valuation?

We’ve raised $6 million so far – and given the market we’re in and growth we’re getting a lot of attention. The business is currently valued at $100 million and we’re heading into another round this summer. And yeah, that number’s going to get a lot bigger.

Which markets do you operate in?

There are only a few places where we can’t operate because skill-based competition isn’t allowed. We’re in 47 states in the US, Canada, everywhere in Europe bar France and Italy.

We’re up and running in Singapore and we’re on the way to being operational in the Middle East. It’s a huge advantage that we have over our competitors: we can expand quickly and easily because we aren’t a gambling company.

Your plans for 2022? More expansion and world domination?

Absolutely. First, the VIP Cheat Codes NFT launch: we want to make a name for Stakester in the NFT space and we’re excited to roll out the in-app benefits that come with it. Then we’re releasing some pretty major updates for the app on the console side of the business.

And we’ve got some major European football clubs (one of which may be the Champions of England) bringing their mobile games onto Stakester.

Any plans for backgammon, I’ve been waiting years for a decent online platform?

I wish I had another answer for you, but unfortunately not. The issue with games like online backgammon or chess is the prevalence of cheating. We operate a zero-tolerance cheating policy and we vet every game before it appears on the platform to ensure that we can police the rules effectively. When you play board games online, there is a staggering amount of cheating – so we’re leaving those alone for now.

Thanks for your time, Tom, best of luck with it all

Thank you! I’ll let you know when we create our own backgammon game.