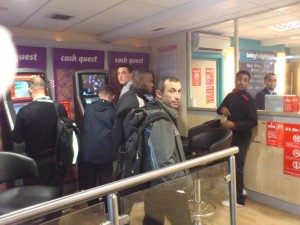 There are only two times in my life that I’ve nearly been lynched, once was a road rage incident in India when somebody threw a rock at me and I lost it, the other was last night outside a William Hill betting shop in Victoria station.

The idea was good. Furtive gamblers at 9.30pm crouched around fruit machines, looking like hyenas around potential prey. Dirty, horrible animals they were… who became wild after the betting shop manager told me to stop taking pictures.

Suffice to say I talked my way out of it, the lure of the gambling machines (or ‘pokies’ I believe they’re called in that citadel of taste and culture aka Australia) dragging them back from me. In some ways it’s not a bad picture, not brilliant, but the feral quality of the gamblers kind of works.

So what did I do next? Well, the train journey was going to take an hour, I was *tipsy*, didn’t have a newspaper so I uploaded the picture to Twitter. The response on Twitter was largely positive so I then published it on my blog because I want people to see my content on my terms rather than go through a Third Party …and the content was good.

That’s why I find it so bonkers that people in their billions post their pictures to Facebook and that $1 billion white-elephant-Titanic-sinking company Instagram. They’re just giving away their content to another party that doesn’t even appear to respect it.

When I lived in India, aside from fleeing lynch mobs, I did post pictures to Facebook, but of places, not my family and especially not my young son. In the old days people used to ask permission to take photos and publish them, although if we were to be strict I didn’t ask those gamblers for permission either.

Anyway, I think Facebook’s stupid, it’s peaked, it spams me more and more, and I’ve never been on the Instagram website let alone post a picture on it. Moreover, I never follow people on Twitter who put ‘photographer’ on their profile because that olden craft is now too easy to be a skill.

Even so, them angry gamblers last night reminded me of my gambling days when I used to manage William Hill betting shops and bet on everything that moved. So, for one day only, you can have the winner of the Grand National tomorrow.

I did like the look of West End Rocker at 14/1 but I’ve looked at Junior at around 12/1 and I believe that horse will win tomorrow’s race.