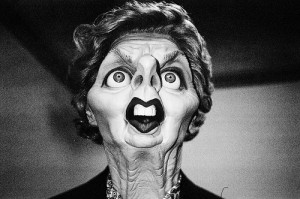 So, I didn’t buy a newspaper yesterday, sick of media Thatcher-death, but this is a generational thing for those of us who were leaving school when she was voted in. Extraordinarily, her gender was never an issue, she was just the enemy.

For anybody five years younger than me, when they left their teenage years the country was in a false boom, the Clash had been replaced by Culture Club and like any non-recession in the UK, style was awful, fashion was worse and ‘yuppies’ were buying shares and braying like their heroine.

At 18, as a medium educational achiever I was smart, left, and lazy. I was a socialist because I thought I had to be, it might have been MY hero Manny Shinwell who said that. It was CND marches, Greenham Common and reggae festivals at Brockwell Park in Brixton.

I was born in privileged Twickenham, but there were no jobs, UB40 became famous as a result. I was, as most young people were at that time, a hater. I nearly became a postman because my A-levels were shit.

If I’d gone to ‘polytechnic’ I would probably have become a Marxist, but I only understood what that means very recently; maybe less than a medium educational achiever. I took my ideals to Israel (who knew?) to join the kibbutzim and found a much more complicated place than the sell-off of this country’s assets.

When I came back 18 months later, if I saw mates up north, it would take about an hour to convince them that I hated her as much as they did. I wasn’t a miner’s son, but I knew that she used the Falklands War as an Orwellian Eurasian etc trick to stay in power. Reagan and the OAS could have stopped that armada at any time. Remember Alexander Haig? Jesus…

When she stood up in the House of Commons on a Saturday and screamed ‘rejoice’ I was worried that I might be called up to fight, it wasn’t exactly the Spanish Civil War, it was a trick-war. Mass ‘media’ such as The Sun gave away badges ‘on offer’ to Kill An Argy. It was like 1980s Groupon. I was so angry when the Belgrano was sunk, even angrier when the Sheffield was sunk and I started fights on the 237 bus to Shepherds Bush when I saw people (men) wear those badges.

I hated her because she smashed people down, she wasn’t even global, she was a local medium-achiever as I was. So I was against her, most of my friends were also against her, we smoked spliff, actually had political conversations and not smartphone distraction; for or against? We were against…. easily against.

That’s talking as 51-year-old man. She made the rich richer, the poor poorer and no Tech City in sight. She would have directed cars at Silicon Roundabout, not understood the traffic. What happened to my country was down to her policies, the fucking school-milk snatcher and vendor of school playing fields.

Over the last 30 years and in a world that has been changed by technology and not Thatcherism, one mellows and probably hates less, worries more about marriage and happiness and the future of one’s children.

So, the 87-year-old irrelevant witch is dead and being lionised in the same way as Reagan was when he died. Urban myths or political myths I think.

She did great harm to the country I was born in, she was a free-marketing fascist that was ‘respected’ by her global opponents. She could have been a US president if she’d been born there.

She used the Chicago Boys’ economic philosophy to experiment with my country and was much loved by the Republican Right in America. She would never have said she could do business with Obama, as she so ‘famously’ said about Gorbachev.

But I don’t care that she has died, perhaps she should have been in that Parisian tunnel with Diana, the time when it would have just about mattered that she died. As the joke goes, first there was the dodo, then there was Dodi, I’d be shitting myself if I was Dido.

I know that people are dancing on her grave, partying at her death, I know that her funeral will probably presage some form of temporarily trending riot by people who have less reason than somebody of my generation to riot for. There was nobody on this version of social media in 1979 and she became a dodo as soon as she resigned from her job.

But I won’t be throwing tomatoes or shitting on her placards when she has this ‘miitary’ funeral, I will just ignore it, watch another box set of Breaking Bad or something, do some work and not watch the TV for 48 hours… or maybe a rerun of Boys From the Blackstuff, which defined the dark side of Thatcherism.

But, even though she has a family and a right-wing friendly media of silly children who believe she changed my country for the better and still support her, I don’t think this is true and there will be a backlash as soon as the ‘our thoughts are with you’ platitudes are done with.

She didn’t, like the New Zealand government who also adopted the right-wing ideas of the Chicago Boys, do good. Her government treated human rights and basic utilities such as water and gas and electricity like the railways and the roads. She didn’t see the limits of the free market, she wasn’t even original, she copied New Zealand; rather like the English rugby team.

She experimented with the people and power of my country; a country that is no longer political, just consumerist, She hated railways and made more roads, created a bifurcated country, not just transport, but London-centric elitism (and I LOVE London).

FFS, she was Pinochet’s best mate.

And I hope Charon, the ferryman in Hades, doesn’t accept the pound coin under her tongue and sends her to Limbo where she can’t do any more harm and those who think she did good, might also think about the river Styx, or more pertinently, the river Lethe where people forget and then pretend that she was somebody who was good.

Apologies for being ageist, but if you’re under 50 years old, you will never know how much harm, she and her emasculated cabinets did to a a country that I wanted to be amazing, inclusive and ahead. That’s why I travelled for the best part of 20 years before finally coming back.

Then, of course, she gave us Blair as her demi-Republican legacy, and to think back about that night, that amazing night when a gay man beat Portillo and we actually had an awesome Government for about two years.

RIP Margaret Thatcher, I doubt you will be able to…. and you probably should have shagged Roland Reagan, or maybe Monica Lewisky… now THAT would have been a story.

But she hasn’t mattered for years; even as a naive, lower-middle class firebrand youth I probably wouldn’t have exulted that much if the IRA had got her in Brighton, but I don’t give a toss about her now, my hate has dissipated and mellowed, as happens to most people who become curmudgeonly old hits.