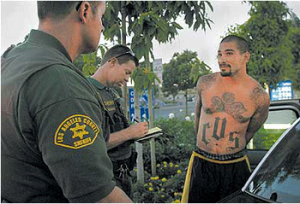 However, who could have ever imagined that these powerful tools would be used by US gangs across America? In cities such as New York, Chicago and Los Angeles, gang members often use Facebook, YouTube, Twitter, Instagram, and other social media outlets to spread vitriolic ‘diss’ messages and encourage rival gangs to respond.

Authorities in New York report that a new generation of gang members increasingly utilises social media to boast of their exploits – issuing taunts and challenges, which all too often results in violence.

This new era of online criminality has forced both police and prosecutors to closely monitor Facebook and other sites for leads and evidence. According to the Chicago Crime Commission, police officers have even found password-protected, gang-related websites that are used to recruit new members, inform current members about meetings or parties, and even to commit crimes.

YouTube has become a hub for such public displays of digital bravado. California’s rival rappers (both gang-affiliated) Game and arch nemesis 40Glocc’s beef originated on Twitter. In a brazen display of public emasculation, Game subsequently posted footage of their brawl on YouTube, showing him ‘serving up’ Glocc.

Game allegedly recorded the fight on his iPhone; his camp then posted the nearly two-minute clips on www.40GloccGKTFO.com (GKTFO meaning “Got Knocked The Fuck Out”). As can only be expected, after the fight each rapper took to his respective Twitter account in an effort to tell his sides of the story.

Often these videos feature young men brandishing guns and rubber bands of cash, as they rap about murdering their rivals. The reason, Rizzo (a former member of the Gangster Disciples) says, is because gangs are sparking a situation to happen.

In a world where image is ALL, gang members and hip-hop artists alike face the peer pressures of worrying about what their followers will think of them. Thus, getting punked has led to copious killings from New York to Oakland.

If you say the wrong things on Facebook or Twitter or post them in a video on YouTube, the implications can be numerous and far-reaching. “You don’t know who’s going to deal with or flat-out shoot you,” says a High Schooler from LA’s Dorcy High School.

Inglewood rap duo Cali Swag District’s Montae Talbert, better known as M-Bone, became one of the first documented victims of a beef on Twitter gone awry. The “Teach Me How to Dougie” rapper’s shooting may have been the result of an ongoing argument he was having online via Twitter. If this shooting turns out to be a targeted hit due to a Twitter war, then it may be the first of its kind.

Gang-affiliated, Chicago based rapper Chief Keef has unceremoniously become the poster child of sophistic social media. The #300 rapper has appeared in videos holding a rifle at a New York gun range, a violation of his probation from the gun charge he was previously hit with after pointing a gun at Chicago police officers in 2011.

Fresh out of jail, the rapper posted Instagram photos of himself smoking weed. Keef, no stranger to social media ignominy, even Instagrammed photos of himself having oral sex – a move which cost him a chance to perform at the 2012 BET Music Awards.

Notwithstanding Keef’s most shocking social media affair was his Twitter war with rival gang member and rapper Lil’ Jojo. Tweets from this online feud lead to Jojo’s death only hours after he tweeted his location. Lil’ Jojo, born Joseph Coleman, was violently gunned down.

Showing no remorse, Interscope artist Chief Keef infamously laughed at the tragic news on Twitter: “hahahahahhahahahahahahahaahhAAHAHAHAHA #RichNi**aShit.” Keef went on to write, “Its Sad Cuz Dat N***a Jojo Wanted To Be Jus Like Us #LMAO.”

Gang members in NY created and Instagrammed a mock-up “Wanted” poster calling for the murders of the two NYPD officers who allegedly shot and killed Brooklyn teen Kimani Gray. The posting on the online photo-sharing website features pictures of Sgt. Mourad Mourad and Officer Jovaniel Cordova above the caption, “50z want these pigs heads….”

Using the handle ‘safjcrossfit’, the Instagram user encourages the cops’ would-be killers to ’empty the clip’. Sources have since said that, fearing for the officers’ safety, the NYPD has provided both officers with police radios for them to take home as a precautionary measure.

What about the plausible accountability of the users, the viewers, and the digital platforms? What is our collective responsibility with regard to digital ethics in an age of video voyeurism and hits as cultural capital? Are we not complicit in these cybercrimes when we continue to watch, promote, and (let’s face it) even enjoy these acts of real-time tomfoolery?

As we become more dependent on digital technology, the rules of engagement become increasingly obscure. The lines between the physical and digital world become a blur. Once upon a time, when you had ‘beef’ with a person, you approached them directly.

However, in an age where attention has become the supreme source of cultural capital, hits on a digital platform serve as the prelude to hits in the streets, one is left to wonder: what would the East Coast-West Coast beef have been life if Biggie and Tupac had just taken to Twitter?