A Kickstarter campaign wants to deliver Michelin quality to the domestic cook with a design-led kitchen knife that cuts to the chase. 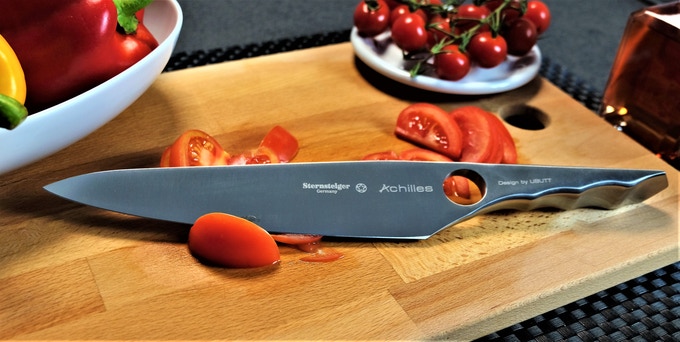 The Achilles knife is the most beautiful thing I have in my kitchen at the moment and while I’m not even a half-decent cook, men like me always enjoy having the equipment.

Twenty-five years ago when I was on the dole, I bought a bread knife for £20 and it still sits proudly in my drawer, so far living up to its life-time guarantee. So, I like kitchen knives and what they represent.

The Achillles Chef’s Knife will cost considerably more than £20 when its Kickstarter campaign comes to an end, $249 (£174) to be precise. For early birds though who wish to pre-order can now get one for $100 (£68).

The campaign is already wildly over-subscribed so there is already a market for such a high-end product. However, does it cut through the hype?

The answer is a resounding yes and that’s because it is design-led. It comes in a box-for-life that begs to be displayed on the kitchen island and is ergonomically spruce.

The hole in the knife may seem like a gimmick, but it adds to the aesthetics and fits the high-end emotions experienced when using it. It also does what every other knife does; it cuts things.

The knife has also been recognised by those who bestow awards. Earlier this year, the Achilles Knife won the German Design Award for 2018 for “Excellent Product Design – Kitchen“. It’s well-deserved.

It remains moot whether a lot of people will pay nearly $250 for a knife, but like anything that is expensive, cost-per-use is vital. It may seem like a lot of money, but if it’s used every day and retains its looks over the years, then it’s a bargain.

I don’t know how much £20 was worth when I bought my bread knife in the early 1990s, but I do know it was one of best purchases of my life.

I have the feeling the Achilles Chef’s Knife possesses the same qualities. Over to you.