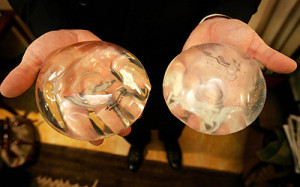 Bubble, bubble, toil and trouble, boom goes bust and turns to rubble… and the great Jellybook idea dies on its arse.

For those unfamiliar with Jellybook, the company was set up in 2011 as the first of many Facebook emulators and the ongoing of the great social media Gold Rush.

Rather like the mythical Great White Hope in heavyweight boxing, it branded itself as the European answer to Facebook and the company raised £11 million when it listed on the London Stock Market; this was four times oversubscribed.

Set up by the ‘colourful’ David ‘Spotty’ Rowland and based in the ‘dodgy’ tax haven of Bermuda there should have been alarm bells ringing everywhere but such are bubbles and such are fools led.

If people had researched Rowland they would have found that he founded Jellyworks, a victim of the dot-com boom and bust in 2000. That company’s shares had surged and slumped in the same way as Jellybook’s would do.

In its first year the company lost £300K and not a single deal or acquisition was done. Rowland was happy to pay money to other companies where he was a Director. The company’s market cap plunged by 60% and the blag was undone.

Over the next twelve months absolutely nothing changed and this week the company announced the inevitable; voluntary liquidation and the return of its (shrunken) cash pile to its investors and shareholders.

So a social media dies and the ‘European answer to Facebook’ only resembled that social network in the way its share price dove after its listing.

The message from such an experience is clear. Never invest in any company that has a name beginning in ‘Jelly’ and is founded by David Rowland. The other is that this liquidation will be the first in many fails in the social media space.

Jellybook was always joining to wobble and melt, it was as obvious as the inflated initial price of Facebook, but people still lumped in. The plethora of companies that have been set up during the social boom HAVE to be culled. Naturally there will be some that are lucky enough to be bought by bigger competitors, but a lot will go to the wall.

This is nature, this is business, this is the way the cookie f*cking crumbles, no point in crying about it. We’ve all been trampolining on the surface of this bubble for five years. If it hadn’t been for social media this recession would have been a lot worse, so it served a purpose.

But it’s time to say goodbye to the first stage of this revolution and evolution. Good riddance, Jellybook, you were never of any consequence and may similar other companies follow your lead. A mass culling is good, whether it’s deer, baby seals (!) or social media guruists, let’s prepare for a better wave.