Finally FinTech launches a product that will make a real difference, a self-pouring contactless payment beer pump! No more waiting at the bar. 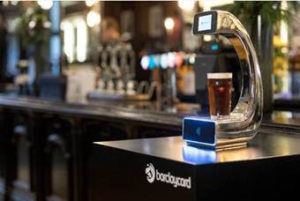 The prototype has been designed to help bars and pubs reduce queuing time for customers buying drinks during busy periods such as Christmas.

The innovation was brewed up in response to one in four Brits getting the “bar humbugs” when it takes too long to get served. The brand new Pay @ Pump prototype lets consumers purchase a pint of ale in three quick and easy steps – order, pay and pour – that can be carried out in just 60 seconds.

As somebody who is prepared to commit murder when waiting more than a minute at a bar, especially at a gig, this is the first FinTech product that interests me in the slightest. According to Barclaycard, the average waiting time at the bar during the festive party season is 12 minutes per order. TWELVE. FUCKING. MINUTES.

The contactless beer pump turns purchasing a pint of beer into three quick and easy steps – “order, pay and pour” – that can be carried out by the customer in just 60 seconds.

Ordering a drink, of course, is a work of art involving flirting, catching the barperson’s eye without being too aggressive and intelligent use of elbows and body space. With pay @ pump, we may also be seeing the end of the barman and the barmaid as we know it. That’s not good. You can’t talk to a pump when you’re lonely and the bar/pub is empty.

However, given the continual rise of ‘touch and go’ payments across the UK, with figures from the latest Barclaycard Contactless Spending Index revealing that spending leapt 173% by value and 112% by volume in the year to the end of October 2016, this can only be the future.

At present, the product is only in the prototype stage and was trialled earlier this week at Henry’s Café and Bar in London’s Piccadilly. Moreover, ale is the recommended product, rather than lager, which is more heavily carbonated and prone to producing a larger head on the drink.