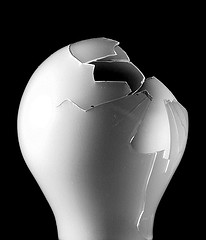 For many startups, bootstrapping a business is the only method of starting a company although this does have its advantages. Bootstrapped startups are more likely to have a more realistic business model and to be profitable early on.

This is in stark contrast to many venture-backed consumer web startups, many of whom are often dismissive of having a business model, let alone ambitions, to sustain themselves outside the VC funding bubble.

Enterprise SaaS companies are more likely to be bootstrapped at an early stage, with many investors preferring to back more fashionable consumer web startups – in particular those based around iOS apps.

If European startups are to emulate this success they must avoid the all too often common temptation of an premature acquisition – usually by large companies in the US.

Despite the recent blockbuster acquisitions of Autonomy and Skype, there is still the potential for the next billion dollar company to be based in London – if they can avoid the temptation of early acquisition.

In a recent essay, Paul Graham of famed startup incubator YCombinator, made a call for the next generation of startups to have great ambitions and think big – replace email, destroy Hollywood.

Grand ambitions… however Graham also said that it was important to keep your grand ambition and long-term plan a secret from any investors for fear of them not buying in to the vision and coming along for a long-term ride.

This reflects one of the major issues with raising investment, and one which could prevent the emergence of a major independent technology company in the UK.

From the moment an initial term sheet is agreed there is a pressure from investors to make a return on their investment, and usually the quickest way of achieving this is through means of acquisition.

Many venture capitalists have a strong preference towards the consumer web, chasing the recent example of an Instagram-type exit that will cover the losses from all the ones that didn’t make it.

Enterprise software businesses are often shunned, not receiving as much interest, despite their generally more profitable models and sustainable recurring based revenue.

There is a trend among investors to back firms with hockey stick adoption rather than those who have a clear business model for monetization and profit.

As more of these venture funding sustained companies fail, those who have based their business models more around the bootstrap mindset will be able to survive on their own resources.

Conditions are becoming more and more favorable for significant technology businesses to emerge in the UK, particularly with the recent changes to the EIS and EMI funding schemes, along with R&D tax credits.

If the next billion dollar company is to emerge from the UK it will take a unique combination of excellent product, investor commitment to the long-term cause and strong leadership.