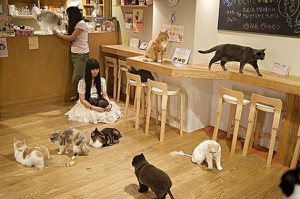 It’s February, the weather is sh*t, the media bombards us with stories about certain days being the most depressing of the year and mobiles, laptops, iPads, cinemas and TVs drag us into their screens of otherworldliness.

The evenings are long, there are no spontaneous outdoor activities and if it wasn’t for sex we’d all go bonkers. At some stage we crack, leave our devices at home and head for the hills for a good walk or fly to a beach to wean us from these awful habits that ruin our eyes and bathe us in blue screen.

In Japan, however, stressed-out and over-screened individuals have another way to deal with unhappiness, unease and depression… and that is to go into a ‘Cat Cafe’. Now, before any of you wisecracks make CHILDISH gags about paying to stroke pussy, this is a serious business.

There are now more than 100 of these cafes where customers pay £1 to spend ten minutes hugging and stroking cats… there is even a ‘three-hour plan’ that costs £15. The clientele, somewhat surprisingly are not old people, but those aged between 20 and 30 years of age.

There are several reasons for this phenomenon, notably the natural reticence of Japanese people when it comes to strangers and the difficulty of renting an apartment that allows pets. The audience is apparently 95% female, a statistic that tallies with my utter hatred for these animals, but everybody to their own.

As I write this I’m trying to think of a non-offensive gag connecting coffee, WiFi and cats but I can’t find one, but however weird and strangely refreshing Cat Cafes are, there may be an arcane reason for their popularity.

Whether it is lack of pets in apartments, stress, a deep love for Phillip Pullman or shyness, I have another theory while Japanese women are flocking to these cafes, and it is a ten-letter word called Tamagotchi.

For those who don’t remember these digital pets that Bandai released in 1996, the Tamagotchi was an alien housed in an oval-shaped mini-computer that had to be looked after by the owner, usually a child, and brought up to be an adult.

Therefore, I venture that those Tamagotchi-owning kids are now the demographic who are paying money in Cat Cafes and shows that there is no escape from screens and digital influences even when stroking a cat to combat stress.

As a curmudgeonly old git, I have a better way to relieve stress (and it doesn’t involve a dark room and a raised bedspread) and that involves a pint of cold beer.

It’s a little more expensive than stroking a cat, but it lasts a lot longer, there won’t be any hairs in it and I don’t have to go to Tokyo, I just have to cross the road opposite the office, which is what I shall do once I’ve finished off this post. Hurrah!