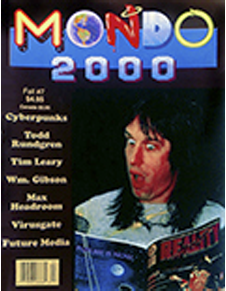 I picked up my copy of Mondo 2000 – User’s guide to a new edge (Thames and Hudson 1992) the other day. What an optimistic and anarchic place the soon-to-be digital world was then, and indeed for the next few years.

Fax machines were vogue, mobile phones were still big and barely anyone was using text messaging. But in Mondo 2000, under article headlines such as cyberpunk, virtual reality, wetware, designer aphrodisiacs, artificial life, techno-erotic paganism the future was being mapped out – and its predictions were wilder than your wildest dreams with genuinely mind-expanding possibilities.

There was a feeling that our rapidly developing technology was about to revolutionise the world. All information was about to be digitised and transmitted using the very new ‘broadband’ using the latest ‘fiber (sic) optic cable’.

William Gibson was perceived of as a prophet, psychedelic drugs were credited as ‘having greatly influenced the development of technology’, they even brought in LSD disciple Timothy Leary to contribute to the debate.

Jaron Lanier (Virtual Reality wizard) was revered, Wired Magazine had just been founded and the future was bright, and involved this radical phenomenon: the internet – a bizarre fusion of sub-culture, technology wizards, hippies, code programmers, heads and ravers.

Some of their apparently inconceivable predictions were wildly off-piste and others curiously accurate. Mondo 2000 explored ‘virtual sex’ as if automaton encounters were just around the corner – but they also broke the news that the revolution that is ‘desk top video editing’ was going to ‘cost around $5,000’ and would soon be available to us all.

In one piece, The Electronic Freedom Foundation (still going strong) was praised for highlighting the need to protect freedom of speech, as we learnt to use our new-found methods of digital communication to express ourselves politically. There were also stark warnings that, in the future, repressive governments would seek to control the internet as information would be distributed too easily.

In another article, Cryonics (deep-freeze for the diseased dead, in order to be cured in the future) was hailed as the ‘tip of the iceberg’ in life extension, and cloning was promised to be common-place – all years ahead of Dolly the sheep.

Smart Drugs, such as Pirecetam, (whose positive influence on cognitive function, without known side-effects, is now well documented) were announced and championed. In music, sampling sounds from existing works, appropriating and applying them to new personal arrangements was considered art, futuristic and genius, not plagiarism.

Hackers were the new freedom-fighters, holographic and colour-changing clothing was seen to be subverting the mainstream fashion houses with London techno-clothes designers such as Daniel Poole influencing the Parisian haute-couture of Jean Paul Gaultier.

By reading Mondo 2000 in those days, one felt switched-on to technology’s possibilities. There was real talk of sweeping away the Old World and replacing it with a New World that fused alternative culture and future-tech.

Fast forward to 2012, these free-spirited digital revolutionary ideas have been corrupted to the point that we now examine the success/failure of mega-corp McDonald’s new social media campaign and rate celebrity by the number of Twitter followers.

Instead of changing the world, social networks and search engines that claim to promote openness and transparency stand accused of commercially benefitting from the detailed personal data they have collected, and rather than championing freedom of speech, they are sometimes guilty of subservience to repressive regimes.

In 2012, we are rarely wowed and inspired by technology, instead we choose to be suspicious and cynical. Naivety has a proven track record of overcoming adversity and we need to recapture this innocence if we are to maintain enthusiasm about this wholly digital world that we now live in…

… or as LCD Soundsystem once sang: “I’m losing my edge”.

Tim is a DJ, music producer and digital advertiser.