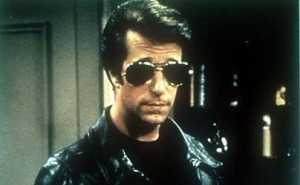 Sometimes there are moments in life when it’s time to look around and accept that it’s not that everybody else is mad and you’re not, it’s just that everybody knows certain things and you don’t.

So it is with the phrase ‘jumping the shark’. I only found out about its weird etymology this week when I finally had the guts in a meeting to admit that I didn’t know what this so-called business phrase meant.

As I’m sure ALL of you know already the term orginally meant a point in the cycle of a TV series when the makers are so desperate to keep interest in the show that they do anything to keep it going. It has since taken on a wider meaning for brands that go too far in keeping and attracting an audience.

And it all began with Henry Wrinkler, the Fonz in (Monday, Tuesday) Happy Days. Now I appreciate that the demographic of this post is probably a little younger than I, but Happy Days was the Friends of my teenage days.

Hands up, I had a black Harrington jacket with ‘THE FONZ’ stencilled in white letters on the back and I rolled up my sleeves in the same way he did, but I must have lost interest before Happy Days (literally) jumped the shark in its fifth series. This is when Fonzie goes off with the cast to LA and shows how ‘cool’ he is by water-skiing over a shark… and a neophrase was born.

An interesting story, but how about ‘jumping back over the shark’ to show how ironic a brand has become by going back to its ‘jumping over the shark’ moment and presenting it as another way of reinventing itself by showcasing its most stupid content as its cleverest content.

No? OK, you’re right, for one minute I started talking like somebody who works for an agency and we can’t have that. But maybe it’s time for a rerun of Happy Days and a return to those 1960s days of innocence.

No? OK, you’re right. We’ll look forward not back, because I’ve run out of gags about stupid bloody sharks.