This contribution is by regular contributor and hip-hop technology legend Mike Johns, President of Digital Mind State who tweets here 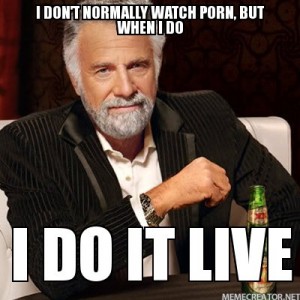 The future of the industry lies in the ability for viewers to call into a show and request whatever he/she fantasies about and have it performed. Before Instagram, Twitter, Facebook and YouTube there was Playboy’s Night Call.

The show was probably the first interactive TV programme. Night Calls was a live phone-in program where viewers were invited to call in and discuss sexual issues — usually fantasies.

Adult entertainment experts are now anticipating mobile smart phones and tablets to overtake PCs and laptops as the primary consumption device for XXX-rated content. eMarketer estimates that there will be 54.8 million tablet users by the end of 2012 and 89.5 million by 2014.

As a result of this widespread adoption, mobile video will see an exponential growth in usage. Mobile videos will grow by 98 percent in 2013. Strategy Analytics predicts that smartphone numbers will reach the billion mark in the next three years.

What about TV? “Moving forward, I think it’s going to be all about IPTV. When your TV and computer becomes the same thing, I think it’s an absolute game changer,” says Steven Hirsch, co-founder of Vivid Entertainment.

Adult entertainment model Jasmine Mai told the BBC: “The adult industry is bigger than every professional sport combined. The sex industry is estimated to gross $12 billion in the United States and more than $57 billion worldwide.”

Sex shaped the Internet as it exists today. Whether you call it adult content, smut, erotica or pornography; whether you consider it disgusting or titillating, the facts are clear that without business and technical pioneers in the online sex business, the internet would never have grown so big so quickly.