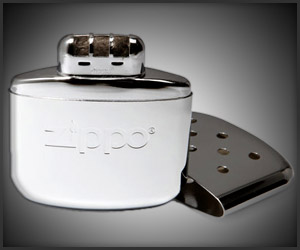 At one time or another, most people who have ever smoked have owned a Zippo lighter. A small object of beautiful desire, the Zippo defined the cool of America, a short-cut to being a beatnik or a hipster… by simple ignition.

I travelled across the States in the winter of 1994 clutching one such lighter, not the square shape of lore, but a customised round one. I was devastated when I lost it; it defined 12 great months of being on the road. Nowadays, I have little need for one as smoking is long gone and it’s not the same using a Zippo to light a bonfire or an in-house candle.

The joy of a Zippo was knowing how to light it and that was by pulling it down as you lit it. That way there were no embarrassing attempts at losing the flame. Owning a Zippo meant you used it properly as well; it was part of its cool appeal.

So, the Zippo Deluxe Hand Warmer brings back great memories and makes diversified sense for the company now the age of smoking is coming to an end. While bigger and palm-friendly yhe shape is the same as before and it feels warm just touching it, and that’s before it is initiated.

Somewhat deliciously, it only works by filling it with lighter fuel, the same familiar process that was part of owing a Zippo lighter. This product is an obvious fisherman’s friend, keeping hands warm on a cold night at sea or by a river, but it is great to hold on to when between pistes on the ski slopes… apres-ski if you will.

The price is reasonable as well, at a little over £20 this is a new and hot design classic classic that warms the heart.