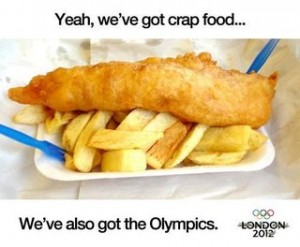 Yesterday I went to Paris to meet Maria Sharapova but it rained and rained so I stayed in the Orange hospitality tent and drank lots of champagne.

By the time I entrained the Eurorail back to Ashford (International is a joke btw) she had just started her match so she didn’t have the pleasure of meeting me. Shame, it could have been the highlight of her career.

Paris is a nice city, but as the taxi wended its way to Gare du Nord I noticed there wasn’t much bunting around… and there was certainly no Olympics signage around. Funny that.

Schadenfreude is a questionable emotion, but I wasn’t alone in laughing (quite a lot actually) as over-confident Parisians filed away from their spectacle with their particular bunting blowing forlornly in the Gallic wind. If I’d had onions around my neck I’m sure I must have cried.

Of course, the London bombings happened the day after the winning bid was announced and things didn’t look good for a London Olympiad but a lot has happened in seven years, not least the widening chasm between London and Paris as global cities.

As a young Londoner I was always in awe of Paris as a much more beautiful and modern city, Nelson’s Column was hardly the Eiffel Tower if you know what I mean. The food was exotic, the language poetic and the girls were amazing compared to a bird from Belmarsh.

Since a tunnel went under La Manche the differences between Londoners and Parisians narrowed. They finally started learning English and we learned how to cook; garlic became something to admire, not use as way to describe a frog’s, er I mean French person’s, breath. We became friends.

However, Paris has suffered and London has risen out of the ashes of the London bombings. The station at St Pancras is as wonderful as Gare du Nord is woeful, broadband and mobile coverage in London is complete, in Paris it is abysmal. Granted the girls are still pretty, but nowadays Paris feels slovenly next to London.

Of course, holding the Olympics is no guarantee for a city’s prosperity and I have no inclination to watch a collection of sports where I’m not convinced drugs aren’t paramount, but maybe this sporting spectacle might actually work for London.

Forget the increased militias ‘protecting’ us during the Olympics, forget the irritating and ubiquitous sight of Jessia Ennis’ midriff on billboards and that mugwump rollmop of a London mayor… even FORGET PEOPLE IN SHOREDITCH, it is a good thing we beat the French to the Olympics.

I now live in the country but I love London and last week on my birthday I made a pilgrimage to the north Portobello Road and the shadow of Trellick Towers. I had a custard tart, a cup of coffee and a conversation about football with a stranger and then drove home.

Maria Sharapova didn’t turn up there either, but she wasn’t needed. Just me, my wife and son, my brilliant personal city and no bunting there either. You don’t get that on La Rive Gauche, mate, know wot I mean.