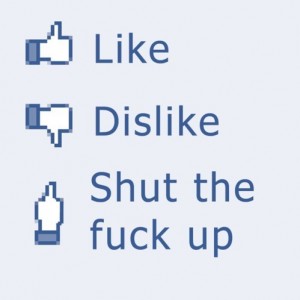 Well, well, well, what an utter f*ck-up that was. The big, bad Facebook bubble burst in investors’ faces and now newlywed Mark Zuckerberg is being sued as well as the NASDAQ exchange.

At least that’s the widely held view. But it should be remembered that the point of an IPO is to raise money. Facebook did that, it raised $16 billion whatever the current market cap of the company.

Even so it’s still a f*ck-up. It wasn’t as if we didn’t see it coming. Farcebook was a startup dating site that got lucky and has been playing catch-up ever since. How can a company like Instagram be worth $1 billion pre-revenue and how can the CEO of the purchasing company decide not to tell his board about it? This is MADNESS, complete MADNESS.

It is this century’s version of tulip mania when the hysteria about Dutch tulip bulbs went bananas. At its height one unbeknown sailor ate a prized bulb thinking it was an onion, but also happened to be ‘worth’ more than the Dutch parliament.

Facebook is obviously worth more than many parliaments, notably the Greek one, and there will be many investors crying tears over this particular onion, but does it has terrible ramifications for the one social networking site that is probably worth more than a global parliament… Twitter.

Facebook ads may be crap and ineffective but it does have annual revenues of more than $3 billion, of which $670 million is for virtual goods and the rest from those ads. Twitter, on the other hand is only expected to see revenues this year of around $260 million.

Any thoughts of Twitter going to IPO have now been dashed and many have suggested the Facebook Farce is bad news for the company. Twitter won’t be raising $16 billion any time soon and the world’s startups are already writing down their value as hopes of acquisition recede.

But is that such a bad thing? The riches afforded by IPOs drive people mad with dollar signs rolling around their eyes, in the same way that VCs exploit delusionary startups. Strong businesses don’t usually flourish with VC banking, it is the tortoises, not the bonkers hares, that prevail.

IPOs allow founders to cash out, as Zuckerberg did, and those companies are then beholden to shareholders who don’t really give a fig about company culture or the user’s desires, they just want dividends.

So, Twitter will remain (sufficiently) independent and we probably have a couple more years of its genius and marvellousness before somebody blows up another bubble and we all move on. Same as it ever was.

As for Farcebook, we will see. But I note that this morning that they have released an ‘Instagram rival’ camera ad. The imaginatively named Facebook Camera is all about NOT sharing pictures on other sites.

Phew, the delusion continues; you couldn’t make it up. At least it stops us from thinking about this ongoing recession… for now.