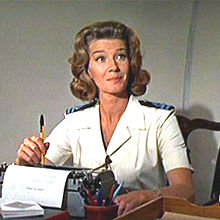 Penelope is an app that lets small business owners control where and when their business calls ring 24/7. The app uses voice recognition technology (via Nuance and Aurix) and is supported by real people, otherwise known as HaaS (Humans as a Service).

Rather like emails, which can be dealt with immediately and on whatever device, calls can be put through to either a mobile, office phone, home phone or to a colleague. Other features include Moneypenny PA, a ‘real’ person who can take calls.

“There are more than 3.6 million micro businesses in the UK who are struggling to stay in control of their calls, but feel that they cannot afford a good quality receptionist. Penelope meets this need, with an app that provides support when and where they need it the most,” saidEd Reeves, Co-Founder of Moneypenny and Penelope.

A service that the market needs perhaps, also nice to know that the somewhat hackeneyed image of a PA is one personified by brand names such as Moneypenny and Penelope. Coming soon, a CEO called James Bond and a company driver called Parker.