Casio has come up with the sporty and classy Edifice range that will attract millennials and more. 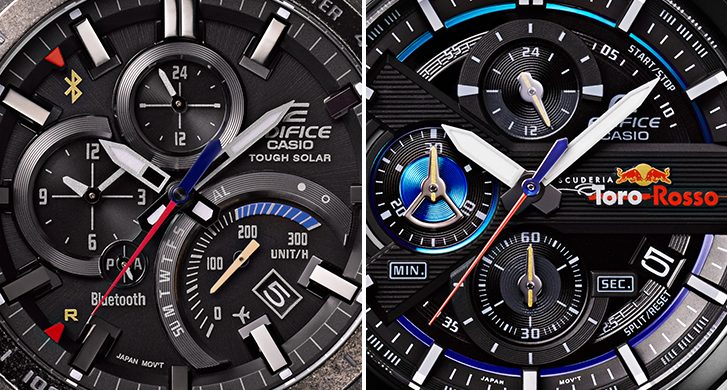 Casio, for those of us who remember the heady days of using a calculator for the fist time, will always be rooted in the 1970s, but the intervening decades have seen this Japanese company branch out into all kinds of technology products, not least watches.

Its Edifice range is a case in point. This reviewer hasn’t haven’t worn a watch since 2005 when my 18-month son dropped my Zenith-wedding-present watch from an upstairs window, but I can see why people wear them… as well as telling the time.

So, somebody sent me a sample of the Casio Edifice EQB-501TRC and I said I’d review it; the first time in nearly two decades that I’ve sent back a sample after reviewing. Things clearly aren’t what they were.

This review, therefore, is completely clean as there is no tacit deal to write a positive one in return for the ‘gift’. No false review here.

The watch looks wrist-made for so-called millennials. It looks expensive and it weighs well on the arm. More importantly it is solar-powered, can connect to Bluetooth and could be described as a ‘half-smartwatch’, although nothing like the real thing.

Personally, I like classic design so the multi-dials and over-features didn’t go down too well, but as I said, it looks expensive and I wasn’t against the feeling of wearing it.

In many ways it felt like wearing a wedding ring for the first time. A bit weird, but something that would be easy to get used to.

At around £400, it’s not cheap (it’s certainly not as much as my Zenith cost) and I fancy many a young person will like the ‘ironic’ ostentation and will buy it for being a watch, not a smartwatch.

As for me, I’m about to put it in a pre-paid envelope and send it back to the company. Even if they had let me keep it, I don’t think I would have started wearing watches again, but I don’t think I’m the market.