I like to make things people use. MD at Techstars. Board member at Lingvist, Motivii and others. Investor in Spatch, Neardesk, GamesGRABR and two yet to be released projects. I read a lot.

Code Club, with the support of Google and CAS (Computing at Schools), has launched a nationwide training programme to teach core computing skills to primary school teachers.

Code Club is a not-for-profit, 1,800-strong UK network of volunteer-led after-school coding clubs for children aged 9-11 years old. Its mission is to put a Code Club in every single primary school in the country. END_OF_DOCUMENT_TOKEN_TO_BE_REPLACED 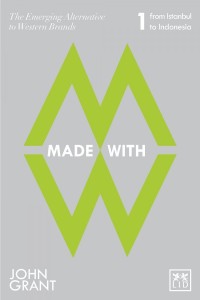 What Grant defines as the ‘Interland’ is one of the most fascinating, fastest growing regions in the world. Ranging from Turkey to North Africa and covering everywhere from the MIddle East right through to Indonesia, the Interland is a place where traditional thinking says that ‘East and West collide’. In reality, these are incredibly youthful societies going through some huge changes – socially and economically.

While most books and reports about this region are dominated by religion, conflict and general unpleasantness, ‘Made With’  focuses on creativity, brands and entrepreneurship. The result is a book that is an interesting primer, though perhaps one that perhaps would have benefitted from a tighter focus, more case studies and more interviews and interviewees. The sections featuring these are the ones that really shine, and it’s a shame there aren’t more of them. With that said, ‘Made With‘ is still well worth a look. 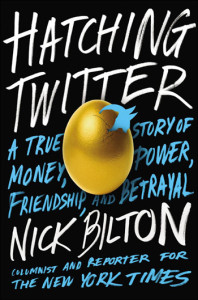 Perhaps the most on-point quote about Twitter in this entire book comes from Mark Zuckerberg, who in 2010 remarked it’s “such a mess, it’s as if they drove a clown car into a gold mine and fell in.”

It’s hard to disagree with him after reading this. Bilton’s book brilliantly divulges the myriad power struggles, fights and personalities who somehow conspired to bring Twitter, against all odds, to a point where it’s about to list in one of the most eagerly anticipated IPOs in years.

With the exception of Biz Stone (who sounds like one of the nicest people in the world), few come out of this unscathed. Jack Dorsey, Evan Williams, Twitter’s investors and many others find themselves embroiled in Borgia-esque scenes of backstabbing, betrayal and buffoonery.

Bilton is a brilliant author, and this is him at the top of his game. Buy it. You won’t regret it. 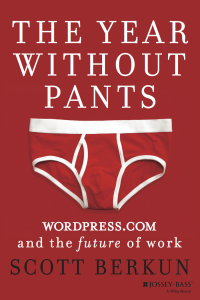 Over 20% of the websites currently online are powered in one way or another by WordPress yet only 120 full time staffers work for its parent company, Automattic. There’s no central office. Staff work remotely – from pretty much every continent on Earth.

The year without pants is based on Scott Berkun’s experience of working with Automattic and their distributed workforce and centres around trying to figure out if and how it works. It does.

It makes for fascinating reading if, like me, you think that office working serves a purpose, but should not be the default setting for organisations. Berkun is an engaging author, and the book gives lots of examples of the processes that WordPress use to overcome any issues that arise from not having physical interactions on an ongoing basis. There are lots of lessons here – not just from Automattic/Wordpress, but also from Berkun’s time at Microsoft. Well worth a look. 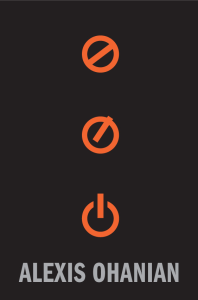 Without their permission book cover

Reddit is incredible. In biological terms, it’s one of the Internet’s arteries. It has humour, character, seriousness and solemnity – and much more besides.

It should come as no surprise that the site’s co-founder, Alexis Ohanian has written a book with the same characteristics. Without their permission is at once funny, informative and touching. Writing conversationally is a difficult trick to pull off, but in Ohanian’s case, he does it with aplomb.

Expect lots of brilliant advice, interesting anecdotes and nods to pop culture in a book that is both a memoir of his time at Y Combinator, Reddit and Hipmunk and a how-to guide for startups.

If you’re have a passing interest in where the Internet is going, you’re going to want to read this. The best books are the ones where I’m left with notes after reading. This generated pages of them.  Enjoy.