Welcome to Mob76 and our readers… please tell us about the new venture, Senius and how you’re working with the Sienna Network?

Senius is a core contributor to the Sienna Network, a privacy-first decentralized finance (DeFi) platform built on top of Secret Network, which enables various financial instruments, such as private trading, lending and borrowing.

We’re launching the first products in April and we are currently raising a private sale that has seen terrific interest and we are excited that our vision has been matched by investors of all sizes.

Most of our readers will be familiar with bitcoin and other cryptocurrencies, but what issue are you trying to solve?

Existing DeFi protocols are fundamentally flawed because transactions are not private and future trades can be seen by everyone prior to execution.

Any transaction can be pre-empted by simply introducing a transaction and paying a higher transaction fee. This is known as front-running and is illegal in the regulated financial system for good reasons. This exploitation has been in its prominence ever since DeFi surfaced and our privacy protocol will prevent that.

Lack of privacy means institutional money will not come into DeFi without a privacy-first solution. These huge institutions don’t want their activities, trading positions and liquidity provision publicly known as it compromises competitiveness.

What are these DeFi products that you speak of?

We are introducing a new interconnected DeFi protocol; a completely private lending, borrowing and, trading experience with great scalability and low transaction fees, and with a bridge for ERC-20 tokens to ensure compatibility with the Ethereum ecosystem,

This makes digital money markets efficient and fungible for everyone, and open for institutional investors. Sienna is aiming to quickly expand to other large blockchain ecosystems as well.

Any reason for naming the company after an Italian city?

Absolutely. Our company was named after the Italian city Siena (Sienna in English), which played a historical role in banking and cryptography almost a millennium ago.

‍In the 12th Century and as early as 1135, Sienna was an important trade city. To support the trade and economic growth of Sienna, the Bishop of Sienna started to offer loans against collateral and interest to Sienna citizens and the many people who traveled to the city to buy goods and sell their products.

At the same time, the world’s original bankers, the Knights Templar, began a network of money transfer locations so people could deposit money in the Veneto region and travel to Sienna and the port of Venice without the risk of being robbed.

Upon arrival at either destination, merchants could withdraw their money from a Templar location by handing in an encrypted document; a unique kind of encryption that allowed people to travel with a document that could only be decrypted by the Templars. It was one of the world’s first adoptions of finance and cryptography.

What are your ambitions for the company in 2021?

Sienna Network is aiming to become the de facto standard for privacy-first DeFi across multiple blockchains, targeting Ethereum initially, the biggest DeFi ecosystem, followed by other blockchains such as Polkadot, blockchains built with Cosmos (IBC) and many other chains in the near future.

The platform is controlled by SIENNA, the governance token, which is earned by using the Sienna platform via liquidity mining and other initiatives over time, creating a fair distribution for a perfect decentralized future, where SIENNA token holders decide over the entire platform.

Where can our readers find out more about Sienna?

Yes, we are on all major networks:

No problem, thanks for inviting me. I look forward to connecting with your readers on the networks above.

Welcome to the first episode of our video podcast BlockSpeak. 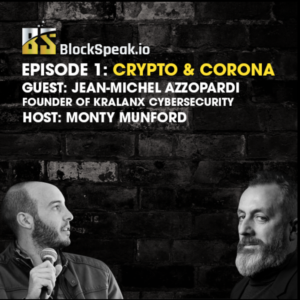 BlockSpeak is a new blockchain and crypto video podcast that interviews the world’s biggest names from marketeers to FinTech to blockchain to Bitcoin Billionaires.

As the pandemic rages and the world moves on its axis very day, it’s vital that we keep talking, even if it’s over a Zoom link rather than face-to-face.

In this episode regular host Monty Munford is himself interviewed by BlockSpeak Co-Founder Jean-Michel Azzopardi to find out what the reasoning is behind the podcast and why it is important that in crazy days an intelligent conversation is vital for our sociability and sanity.

Munford reflects on his career as a tech journalist for the past decade and speaking at more than 200 global events as an emcee, moderator, panelist and keynote speaker at prestigious events around the world, focusing on technology change, good and bad, current or emerging.

He has interviewed on stage leading icons such as Kim Kardashian, Steve Wozniak (twice), Gary Vaynerchuk, John McAfee, Brock Pierce, Brian Solis and many others in cities as diverse as Beirut, Moscow, Vienna, Nairobi, Johannesburg and Hanoi.

He was previously a weekly tech columnist for Forbes in New York, the Telegraph in the UK and continues to write regularly for the BBC and The Economist.

He is also the founder of tech consultancy Mob76 that helps leading companies raise their profile and he publishes a Google News-verified blog, Mob76 Outlook, which you’re reading now.

BlockSpeak has the initials of BS, but this podcast is the opposite of the ‘other’ BS. Guests are encouraged to come out of their comfort zone and engage with Munford and a discerning audience.

Nobody knows what this pandemic has in store, but BlockSpeak will keep people in touch with the world and ensuring that the conversation goes on.