Brent Hoberman AND his partner Spencer Crawley will be backing the next wave of emerging European technology talent. 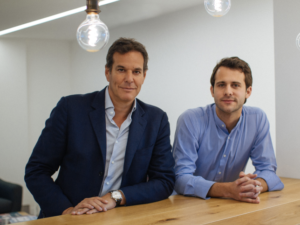 Despite the lower-case name and its obvious allusion to Hoberman’s Lastminute.com venture, Firstminute capital, the new fund he has co-founded with Spencer Crawley, is a welcome addition to European seed funds.

The fund has announced a first close of $60 million with London-based global VC Atomico as a cornerstone investor and 2​4​ other founders of billion dollar technology businesses. It will look to invest between $250-$750K in early stage technology businesses across Europe.

This roll call is supported by a number of strategic global family offices, who will play an active role supporting firstminute’s portfolio companies as they expand globally. This is rounded off by a cluster of current or former CEOs and chairpeople of major businesses, across both technology and traditional industries.

“We will invest not just in the UK, but across Europe. We were aiming to raise $60 million for our first fund and to have achieved that with oversubscription before our final close is a strong signal for European technology. We believe the fund represents an unparalleled wealth of expertise to deliver on this promise,” said Hoberman.

Hoberman has a long history of supporting entrepreneurship across Europe, from his co-founding of lastminute.com (operational across 14 countries), Founders Forum and Founders Factory, to scaling MADE.COM to six countries in Europe as founding Chairman. He has also advised UK government on entrepreneurship and co-founded technology businesses that have raised over $500 millon cumulatively.

And let us not forget Spencer Crawley as co-founder and Head of Investments at firstminute capital. He was previously in the Business Development team at AppDirect (backed by Peter Thiel’s Mithril Capital, latest valuation $1bn+) was Investment Associate at DMC Partners and Analyst in the Moscow office of Goldman Sachs. He also speaks fluent Russian.