Despite spending one fifth of the working day in meetings, 57% of UK office workers feel they are not productive and that time should be better spent. 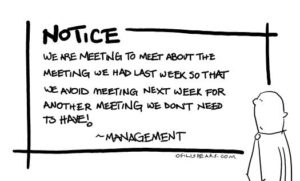 Meetings about a meeting and the follow-up meeting are the banes of modern industry.

According to marketing technology company Wacom, more than £29 billion every year in the UK is wasted due to unproductive meetings and 37% said they would become more efficient and engaging if there was a ‘laptops down’ rule

Although laptops and smartphones are common protocol for meetings, they cause attendees to pay less attention and it is astounding that, like conferences, workers and delegates are not banned from using them when attention needs to be focused.

It’s also about length of meetings. For some insane reason, office meetings always seem to last for an hour, that’s when the ‘meeting room’ is always booked out for. Even if they were curtailed by ten minutes, that would mean a saving of an hour a day if six had been planned.

The Wacom data comes as no surprise, but there are reasons why the company conducted such a survey as it sells products such as the Bamboo Folio and Bamboo Slate smartpads that let users write with the touch of a button. No distractions there then.

“Meeting organisers and presenters worldwide are constantly competing with devices for the attention of attendees. While most people use the devices for note-taking, the temptation to multi-task is just too great. These distractions have a negative impact on stress levels, productivity and ultimately the bottom line,” said Jeroen van‘t Hoofd, Wacom spokesperson, EMEA.

As somebody who moved out of an office a decade ago, the advice from this quarter is to hold meetings that last for 30 minutes and limit them to four people. The rest of it, such as the delegation of tasks can easily be done by electronic purposes… or be talked about it down the pub.