The BiOS mobile home offers two up, two down living space and a roof garden. 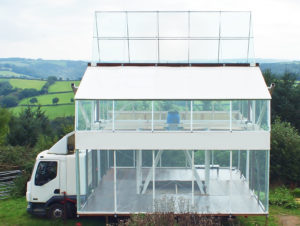 A mobile and ‘folding’ house known as the BiOS may change the way we live and do away with expensive mortgages forever. Obsessed engineer Richard Perkin has launched his project on Kickstarter last month with a view to bringing the house to market and allowing the designs to be published for DIY construction.

Unfortunately, the KickStarter project failed to raise the initial £5,000 to develop the concept of completing the prototype of the double folding house and to produce the necessary documentation for plans and assembly instructions. The 800 square foot structure folds down to a shipping container sized unit, so it is easily transportable anywhere in the world.

I like this idea, however, and perhaps Perkin should try again.

The mobile home, called the BiOS, offers plenty of living space – two up two down, with a roof garden that can be used for growing fruit, and herbs. The 800 square foot house folding structure, which costs around £16,000 to build, aims to provide an independent and sustainable lifestyle, ultimately incorporating water, heating, refrigeration and food production along with waste reduction and recycling.

The BiOS underscores the growth in the ‘tiny house’ movement and a progression in the nomadic way of life. The mechanical engineer aims to provide a mobile, self-sufficient, off-grid solution for people who want a simplistic lifestyle with minimal impact on the environment.

“There is sufficient moisture in the air in most places to allow what is essentially an air-conditioning system to condense that moisture from the air to provide water for drinking, and cultivation of plants. Besides allowing complete freedom of movement without having to worry about a local water source, having such a unit installed in the house will provide refrigeration for food as well as cooling and heating for the inside space.” 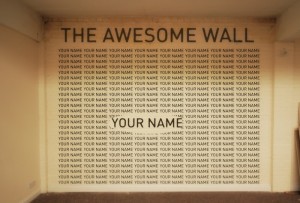 Squatter, rather like the word blogger, sounds like a pernicious term. But over the past 30 years in this part of London vacant buildings have been transformed by these enlightened, rather than benighted, people. END_OF_DOCUMENT_TOKEN_TO_BE_REPLACED